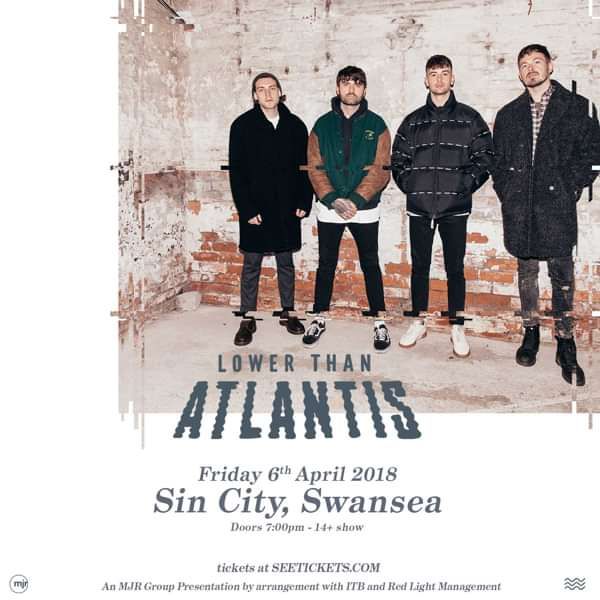 Lower Than Atlantis - SOLD OUT

PRE SALE TICKETS AVAILABLE ON TUESDAY AT 9AM

GENERAL SALE TICKETS RELEASED ON THURSDAY AT 9AM

The MRJ Group and Sin City are proud to present...

Supports to be announced...

Hailing from the London satellite town of Watford, Lower Than Atlantis were formed in 2007 by Mike Duce (lead vocals, rhythm guitar) and Ben Sansom (lead guitar, backing vocals), whose shared love of bands such as Biffy Clyro, NOFX, and blink-182 would go on to inspire the group's early sound. At the end of 2008 -- after various lineup changes took place on bass and drums -- Lower Than Atlantis released their debut EP, Bretton. Clocking in at under 20 minutes and featuring eight tracks, the breakneck melodic hardcore punk sound of the EP would signal the direction of their 2010 debut album, Far Q. With the addition of full-time members Eddy Thrower (drums) and Declan Hart (bass), the band returned to the studio to record its sophomore release, 2011's World Record.

Taking on a more alternative rock sound inspired by the likes of Foo Fighters and Jimmy Eat World, the album signaled the band's continued evolution from hardcore punk to melodic indie rock. Signing to Island Records at the beginning of 2012, the band released its third album, Changing Tune, in October of that year. Two years later, after Lower Than Atlantis parted ways with Island, they announced they had signed a new deal with Sony Music. Pushing their sound further away from the hardcore punk of their early days, they released their more arena-friendly self-titled fourth album in October of 2014. Their fifth album, Safe in Sound, which continued their anthemic rock sound, appeared in early 2017